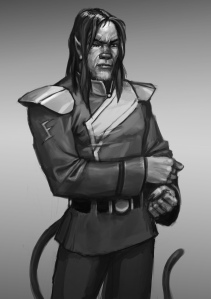 Baron Claw is best for his hunting prowess and his loyalty to Fegarian law. He is also known for having a “Slaver”, a creature that lives in his shadow. He got the Slaver by hunting and capturing it from the realm of Karussh.

He is also the leader of the Fegarian High Command, better known as The Baron Four.

The Book Of Events Version 1.0: The Destiny Saga Encyclopedia